The following piece is an excerpt from a memoir cookbook I’ve been working on for over a year. In preparing this post, I realized that I haven’t ever posted the recipe for the Laguna Writers Brownies on my blog. It has a central spot on my web site, but still: it seems wrong that it hasn’t appeared here yet. So please find the brownie recipe at the bottom of this page, after the excerpt. 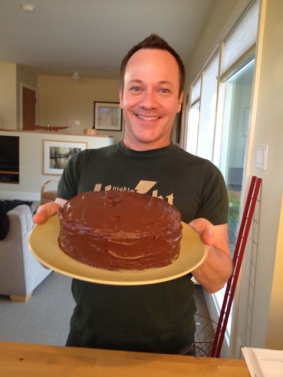 Here are a couple of prompts too:

Blend the butter and sugar and eggs

She thinks she’s all that and a bag of chips

He was nervous as a hummingbird

I really learned to cook in my early forties. I roasted chickens and ducks, and the occasional goose. I made stews and sauces, and eventually even mastered Thanksgiving dinner. Friends often ask me how I make my roasted root vegetables, and with absolutely no sarcasm at all I reply, “I cut them up and roast them.” (Actually, I’m usually more specific than that, but the recipe is really just olive oil, a red onion, and an oven set to 375 degrees Fahrenheit.) I am so thankful for the family and friends who encouraged me to cook, but my first love always has been, and always will be, baking.

I can’t actually remember a time in my childhood when I didn’t bake. Some of my earliest memories—when I was only four or five years old—are in the kitchen with Mom, making brownies. I vividly remember mixing together the sugar, butter, and eggs, adding cocoa, topping off a measuring cup of flour with a butter knife, and watching the alchemy of batter rising in a pan in the oven. When I began my writing workshops more than thirty years later, it was Mom’s brownie recipe that inspired me to create my crowd-pleasing Laguna Writers Brownies.

I wish I could tell you I’ve never burned sugar in an attempt to caramelize it, but it isn’t true. (The secret there is stay put: don’t leave the pan for even a second!) Still, I rarely burn something. My nose for when something is done is keen; I have a baker’s nose (inherited from my father). I can smell when that cake needs to come out of the oven.

I guess my love for baking began with my love for sugar, which is every kid’s addiction, isn’t it? Halloween candy had to be handed over to Mom the minute we got home. She doled it out in daily rations for what seemed like months; otherwise,  she warned, our teeth would “rot out of our heads.”

We weren’t sugar shamed or sugar denied in my family, but we were sugar controlled, understandably. Even if you hadn’t finished your entire dinner, you could still have dessert, but dessert before a meal was equal to swearing or fighting: not what a well mannered child did, at least not within range of our mother’s wide radar. I swore for years that she really did have eyes in the back of her head. I know she had bionic ears (I have inherited those from her). She also had great emotional intelligence, and could easily catch you in a lie. In other words: we followed her rules.

But looking back, I know I inherited my love for sugar from both of my parents. My mother was impossible to talk to when she was working her way through a hot fudge sundae; she would enter a kind of euphoric trance. And years after Pop’s cardiologist made him promise to give up fattening, sugary snacks, we would find candy bar wrappers smashed down between the front seats of his old Audi. Whenever we confronted him with the evidence, he would wave it away and say, “You have to have a little something sweet every day.”

My Grandpap (my Mom’s dad ) was no different. He used to give us a chewy ginger cookie while we were still working our way through a thick slice of chocolate cake and a big scoop of vanilla ice cream. He was a sugar pusher, for sure.

I guess you could say I come from a long line of sweethearts, and baking is one way I connect to them over and over again.

To make the brownies extra fudge-like, melt an additional ounce of chocolate in the double-boiler with three tablespoons of water (if using a microwave, heat one minute on high). Mix water and melted chocolate together until the mixture is thick, but pourable, like gravy.

Spoon the melted chocolate over the top of the brownie mixture in the pan in thin strips, from top to bottom, and also from side to side (making a criss-cross pattern on the top of the mixture). Run a butter knife through this pattern to form a ragged “fleurs-de-lis” pattern that will melt into the top and take the brownies to a whole new level. (A special thanks to AWA Affiliate Joan-Marie Wood, who taught me this).

Place rack in the upper third of oven, and bake at 350 degrees for about 28 minutes, or until edges begin to brown. Cut into small squares.

Today the prompts are connected to a vegan cupcakes recipe that I’ve remixed and remastered.

See a few prompts and the revised recipe below.

In a large bowl, sift together flour, baking soda, baking powder, and salt.

In a separate bowl, mix together oil and sugar, then add coconut milk, vanilla, and unsweetened coconut flakes.

Add dry mixture to wet and mix until combined. The batter will be shiny and sticky.

Scoop batter into cupcake liners, filling about 2/3 full. Bake in oven for 16 minutes. The cupcakes are done when a toothpick inserted into the center comes out clean. Allow cupcakes to cool completely before frosting.

To make frosting, beat coconut oil in a mixer until smooth. Add vanilla, coconut milk, and coconut flakes, then add in the powdered sugar (while mixer is blending).

Pipe your frosting onto your cupcakes or smooth frosting on with an inverted spatula.

This prompt is one I call, “Absurd Modifiers.” Everyone begins with a sheet of notebook paper folded in half lengthwise, creating two columns (one in front and one on the back). On one side, I ask everyone to write down ten nouns (a person, place, or thing).

Then everyone flips over the folded sheet and passes it to the person on his or her right, BLANK side up. On this blank side, I ask everyone to write ten adjectives (colors, texture, size, speed, attitude—bitchy is an adjective I often suggest).

I ask everyone to pass the folded sheet to his or her right one more time, and for the person who receives to open it up: now both lists are visible. Finally, everyone takes the two lists and matches up the nouns and adjectives in the most absurd combinations.

Examples of the resulting pairs look something like this:

What I wrote is below.

There were many nights during the spring semester when a stack of student essays sat on my kitchen table waiting impatiently for me to grade them. And although I knew an eight hour marathon grading session was worse than chipping away at them a few hours a day, my resistance seemed to mount the longer they sat there.

This went on day after day.

I wanted to do everything else: watch Dynasty reruns with a close friend, clean up my iPhoto library, read The Huffington Post, see a drag show—I even chose ironing once, a chore I detest.

Who gave them this assignment? I sometimes wondered as I read about human rights violations and environmental disasters. But of course, I knew the assignments were my own creations, foreign to me now in ways I couldn’t articulate.

Another stack consisted of short essays that asked ESL students to summarize, to quote, and to paraphrase. The students also had to construct argumentative theses and integrate outside sources. I looked forward to their repetition the way I look forward to a trip to the gym: with a lack of enthusiasm and a fat dose of guilt.

I had to grade those essays, but I wanted to do everything else: drink white wine from New Zealand, perfect the lemon bar recipe, bake a champagne cake, whip up a double batch of chocolate peanut butter cookies.

Instead of grading papers, I poured over photos on Pinterest and got lost in recipes and food blogs. I dreamt about coconut loaves, cream cheese chocolate chip cookies, Greek macaroni and cheese. I read the bios of business men and women who became food blog celebrities, who survived painful divorces, years being single, and dead end jobs. They all seemed to find a path out of hopelessness that was lined with peppermint cupcakes, pesto-stuffed halibut filets, and mascarpone mashed potatoes, piped into an enamel-coated cast iron baking dish, beautifully browned.

I left the essays behind for awhile and entered this edible world instead.

It gave me hope.